The release 1.3 of Kronometer has been realized after a review made by the KDE team, which allows Kronometer to join the KDE Extragear repositories (in the Utils sub-module). The KDE Extragear is a collection of KDE applications which are released indipendently from the applications within the well-known KDE Software Compilation (KDE SC). So, Kronometer is part of the KDE community. First of all, now Kronometer uses the official KDE bucktracking system. If you find a bug or if you want a new feature, feel free to report it here. The next steps should be the text localization by the KDE guys and the packaging for the major linux distributions.

Speaking of the 1.3 release, the main change is a big redesign of the stopwatch display, based on the suggestions by the KDE team. In particular, a serious bug with many exotic fonts has been fixed. If you are interested, try to use an exotic non-monospace font in the display (on one of the previous releases), e.g. the Fontin font, and you will experience a very akward behaviour in the UI. In general the UI is now much more clean than before, as you can see in the following picture, where in the foreground there is the new release while in the background the previous one. 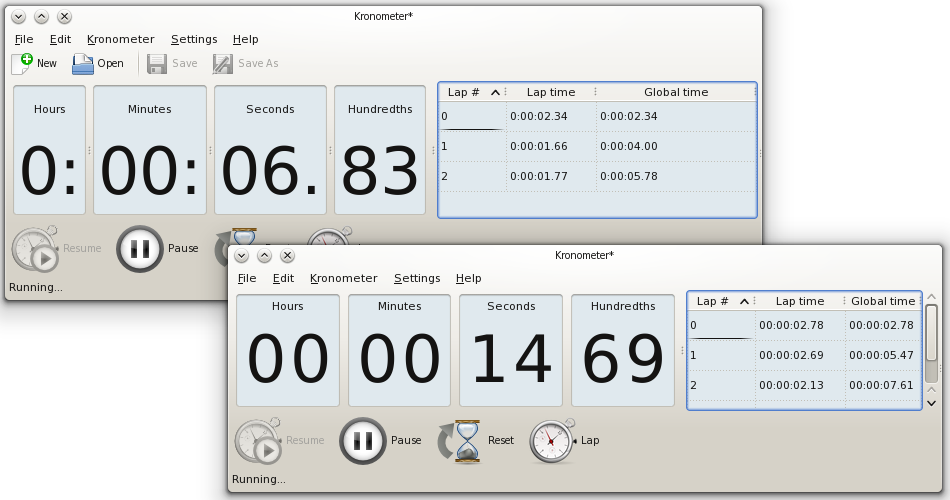 Some small new features are in planning, like the system tray support, but of course the next big step in the kronometer development will be the port to KF5 (KDE Frameworks). This should help the porting of kronometer to other platforms, where sometimes the whole kdelibs package (which is required by kronometer) is hard to accept for such a simple application like kronometer.