Adding checksums to the Dolphin’s Properties dialog is something that has been on my TODO list for a while. I always try to verify the integrity of what I manually download from the Internet (and you should too). Yet, tools such as md5sum, sha1sum and friends are annoying to use (though not as annoying as checking GPG signatures), even for those who are familiar with the command line.

Finally, I managed to hack this dialog, which is actually provided by KIO (and used by many other apps, for example Gwenview!). This is the result: 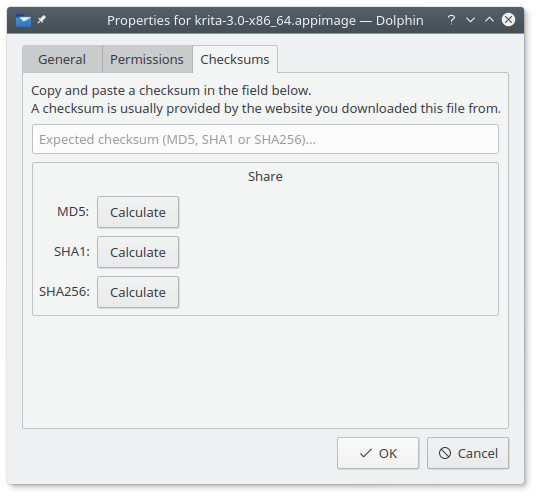 Thomas Pfeiffer (from our awesome VDG team) helped to design the final layout as you see it now, based on two different user stories (use cases):

In the first case, wouldn’t be awesome if you could just copy-paste the checksum you found on some website, in order to check whether the corresponding file is not corrupt? That’s exactly what the dialog allows you to do!

You don’t even need to know whether the type of the checksum is MD5 or SHA1 or SHA256. Either it matches or it doesn’t, that’s all the user needs to know!

The dialog is smart enough to detect the type of hash in the copy-pasted text, which will be compared with the actual checksum computed from the local file.

If the checksum doesn’t match, this is the warning you will get:

In the second story, you want to share one or more checksums. To do so, you just need to press the corresponding button and copy the checksum to the clipboard.

Thanks also to David Faure and all the other developers who reviewed the code. This feature will be part of KIO 5.25 (due next month).

By the way, this is why I like the monthly release schedule of the KDE frameworks. Users can get new features at a higher pace than the one from KDE 4 times (which was twice per year, more or less).

On another topic, please consider donating to the Randa Meetings fundraiser campaign. At the time of writing, the campaign reached the 57% of the goal and there are only 2 days left. There is still time to do better! The KDE community need as much help as possible to support the work of their developers. Even a small donation is important!