Ark 15.08 was the first Ark release after the port to KF5, so there wasn’t much room for new features. With the upcoming 15.12 release the situation is quite different, as there are a significant number of changes that are worth of a blog post.

First of all, the plugin loading mechanism is now much more smart: Ark can load an alternative plugin if the highest-priority one is not found. This allows us to set p7zip as the default backend for zip archives handling, in order to fix one of the biggest issues of Ark: proper support of unicode archives. So if you work often with archives whose entries have non-ASCII filenames, make sure to install p7zip on your distribution. If p7zip is not installed, Ark will fallback on using info-zip as currently does.

One of the most requested feature was the ability to open an archived entry directly in the default application. This was already possible by right-clicking it and using the “Open with…” action, but now there is a dedicated “Open File” action that the user can trigger with a single click. Even better, through the settings dialog Ark lets the users choose what to do when an entry is clicked: open directly in the default app, or preview using the KParts technology. 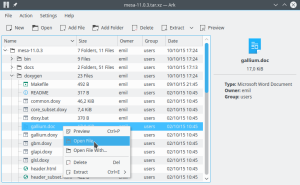 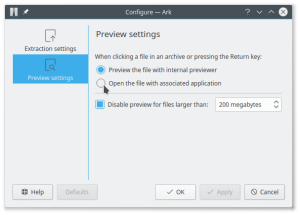 Another useful feature is the ability to read archive comments. Ark can now show comments in zip and rar archives. Currently, it is not possible to edit/add comments, but this will implemented in a future release. 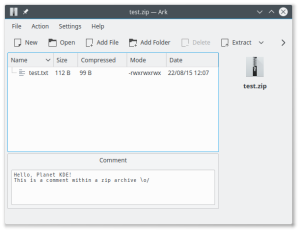 A very important feature is that Ark can now detect whether an archive is corrupt. In this case, Ark will ask the user whether to attempt to open the archive. If the user chooses yes, the archive will be opened in read-only mode (you won’t be able to add or remove entries). This makes sense because a huge archive might be corrupt in a very small portion of the file, yet the 99% of the content could still be extracted. This feature is available for zip, 7z and rar formats. 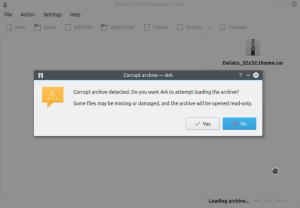 Thanks to Ragnar Thomsen for his awesome work on implementing these new features, and thanks also to the VDG for their feedback on the UI changes.

Besides the new features, many bugs have been fixed with this release. The most annoying ones were the broken drag-and-drop to the desktop and the broken preview of XML files. The former has been fixed by Eike Hein on both the Ark and Plasma 5 sides (you will have to wait for Plasma 5.5.1 though). The latter has been fixed by dropping the old and deprecated KHTML framework/kpart. The Kate part is now used by default to preview XML and HTML files. Rendered previews of HTML files is no longer available, but now you can open them directly in your default browser using the new Open File action.